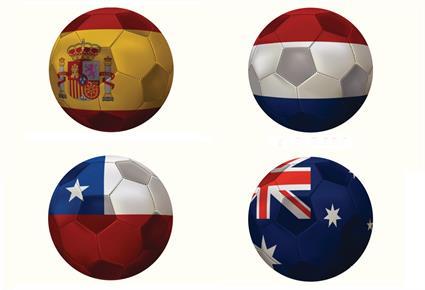 Briefcases, power lunches, two silhouettes shaking hands in front of a massive graph with all the arrows pointing up: the business world is a far cry from small boys in the park, rush goalies and jumpers for goalposts.

But we love the World C

Here we take a look at Group B - which includes reigning world champions. Spain!

Unlike their national football squad, the Spanish economy has hit a rough patch of form in the last few years. The 2008 credit crunch left Spain's once booming, construction-driven economy free-falling towards bankruptcy and in need of an EU bailout.

The current economic climate in Spain is a mixed picture: by the end of 2013, the nation had entered its fastest rate of growth for half a decade. But this seemingly good news is weighed down by the soaring unemployment rate of 25% and climbing, and a bloated infrastructure that saw a huge overspend on housing and transportation projects.

Spain, then, is a mixed picture. It is not an attractive destination for retailers or for luxury goods, as disposable income is concentrated in a shrinking section of the population. But attracting foreign money into the country is the fastest road to recovery.

A developer – or even a bed and breakfast owner - who can entice visitors to a new region whilst making savings on the deflated real estate market, might just be onto a winner.

Browse businesses for sale in Spain

For a relatively small country, the Netherlands' place as the world's 17th most prosperous nation is a good indication of its developed infrastructure and its advanced, tertiary economy.

Though it didn't escape the 2008 banking crisis unscathed, its position has meant that it has weathered the downturn better than most, and remains a stable prospect for both investors and entrepreneurs.

The Netherlands finds itself in an ideal situation both geographically and politically, as one of the founding members of the EU which, at the same time, shares a border with Germany. More than a quarter of all export activity is through trade with their German neighbours, and the Dutch have found an ideal niche in providing transportation and logistics services to the EU and the world.

Shipping and haulage businesses thrive in the Netherlands, whilst software developers who supply these businesses will find some of the world's biggest players as potential customers here.

Browse businesses for sale in The Netherlands

Chile enjoys the status of being one of the most stable economies of all the Latin American countries, and was the first in the region to become an OECD member. The country has a developed an open tertiary sector that welcomes free trade and foreign investors, and this has allowed Chile to play an important part in trade between east and west.

Despite a growing services sector, Chile maintains a solid manufacturing and agricultural base that sees the economy exporting raw mining materials to their largest trading partner China, and luxury goods including fresh fruit and wine to The United States and Europe. This would make Chile an excellent location for food processing, packaging and exports businesses. And there is even potential for a Chinese language school!

Another example of a strong, service-led modern economy, Australia is positioned somewhat differently to many comparable nations around the world, in that it has continued to experience consistent growth for the past 21 years.

As a commodities-rich nation with a relatively low population, Australia has profited massively from mining and exports, leaving both sectors now saturated, and forming the core of economic activity. The resulting increase in living standards thus makes Australia a fine destination for luxury goods retailers – from wines and spirits to fashion and jewellery.

And why not increase your green credentials? With their agreeable climate and growing disposable incomes, Australians make the ideal customers to benefit the most from photovoltaic solar roofing.

Browse businesses for sale in Australia